It was the summer of 2013. I was driving to visit my then boyfriend, who lived out in the boonies of Southwest Virginia. A lovely area, I was not thoroughly practiced in driving there and thus, was driving a bit more carefully than I normally did. My GPS, Saxton Hale, had crisply told me in his thick Australian accent that a left exit was about 2 miles in my future. I promptly moved into the left lane not wanting to attempt changing lanes while looking out for an exit. Multitasking while driving is never a smart thing, and I was trying to alleviate any confusion or stress. Well, in that instant I realized how long 2 miles could become when everyone coming up behind me began honking at me. “Who, me?” I mouthed as angry drivers careened around me, screaming, gesticulating, and swearing. I mean, it was terrifying. I thought I was going fast enough, 5 or 10 miles over the speed limit, yet people kept pulling around me. I ended up making my exit and when I reached my boyfriend’s, called my dad to let him know I had made the 7 hour journey safely. I told him about the incident and he chastised me, “The left lane is the passing lane, you know this!”

Fast forward 3 years and a break up, and some might say I haven’t learned my lesson. If you’ve been in the car with me you know the left lane is my haven of speed. I have become one of those swearing, gesticulating people who punish the plebeians driving slowly in the fast lane. “It’s called the fast lane for a reason buddy,” I may mutter while weaving or darting in and out of traffic, searching for an open patch of asphalt on my personal Autobahn. But, according to Virginia Code, I may have actually learned my lesson.

You see, while speeding is illegal, and darting in and out of traffic is dangerous and may be cause for a reckless driving citation, Virginia is one of 6 states where the left lane is a yielding lane. Many states have designated the left lane as a passing only lane, where it is illegal to sit or stay in the far left lane. In Virginia, while it is a designated passing lane, you may sit in the left lane as long as you are not impeding the flow of traffic. Code § 46.2-804 states: “…1. Any vehicle proceeding at less than the normal speed of traffic at the time and place and under the conditions existing, shall be driven in the lane nearest the right edge or right curb of the highway when such lane is available for travel except when overtaking and passing another vehicle or in preparation for a left turn or where right lanes are reserved for slow-moving traffic as permitted in this section;…”

What does all this legal jargon mean? Do not drive slowly in the left lane.

I wish my car would transform into Bumblebee.

While slightly joking, it does mean just that. You see, “normal speed of traffic”, is not a very specific term. It is arguable, as many things in the legal world are. Is the normal speed the legally posted speed? Is it the average speed of the moving traffic? Is it the speed of the person tailgating you? In most situations, the normal speed is the average speed of the moving traffic, so that means on 95 N, normal speed could be 75 or 80 miles per hour (we do not suggest you drive this fast). But if you interpret “normal speed of traffic” as the group of cars you’re driving with, does that mean the jerk running up behind you is wrong? According to Virginia Code § 46.2-842, you need to move over for the tailgating jerk behind you (i.e. me). Virginia Code § 46.2-842 states: “Except when overtaking and passing on the right is permitted, the driver of an overtaken vehicle shall give way to the right in favor of the overtaking vehicle on audible signal and shall not increase the speed of his vehicle until completely passed by the overtaking vehicle….”

This code legitimately means that if you’re in the far left, driving with traffic, and someone is quickly coming up from behind, you must move over and allow them to pass. According to this code it is also perfectly legal to audibly signal, i.e. honk, to tell drivers to move over. (495 is about to get louder whenever I drive to Tysons.) Now, we all know that this rarely happens in Virginia (not the honking, but the moving over). Oftentimes, people in the left lane sit there, impeding those people willing to drive at reckless speeds. What they don’t realize is that by sitting there, they are breaking a Virginia law and they are causing more dangerous road conditions.

You see, these codes are in place because humans are just that, human. We’re going to speed, we’re going to get angry, and that’s when mistakes happen. If you have relatively slow drivers scattered between lanes it forces faster drivers to repeatedly slow down and weave back and forth between lanes. Lane changes are dangerous and if you use the left lane as a passing lane only, or allow others to pass you, you cut down on the amount of lane changes. Furthermore, studies have shown that it is more dangerous to slow down to lane change than it is to speed, because the strongest indicator of an accident is variance from the average speed. Going 5mph slower than the average flow of traffic has been shown to cause more accidents than driving 5mph faster. So what are we saying? We’re not telling you to speed, weave in and out of traffic, honk, or tailgate. Just because the law states that those driving in the left lane should yield does not mean you should take advantage and go 90 on the beltway. In fact, police would rather pull you over for reckless than the other guy for “slowpoke” laws. All we’re pointing out, is that it is safer to drive in the right lane unless you are passing. Doing this cuts down lane changes, which will help decrease the number of accidents on the road. All we want is more safety on the roads, whether that be cutting down on the amount of distractions while driving, or following proper highway passing protocol.

As always, this is not legal advice, nor driving advice. Though I may take my own advice and slow down and stay out of the left lane from now on. 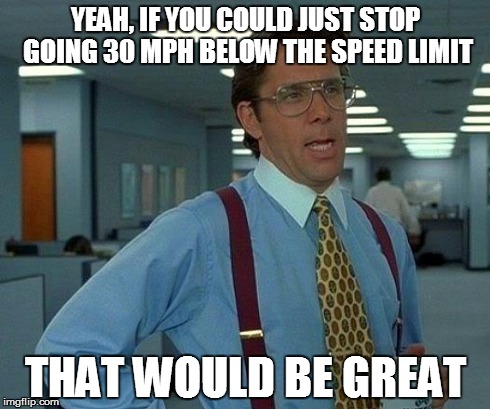 Rakin Hamad is a recent graduate of the George Mason Law School and joined Curcio Law as an associate in August 2018. Rakin works closely with Tom Curcio and staff in preparing cases from the initial client meeting through trial and has been a perfect fit for the firm. During law school, Rakin interned at…