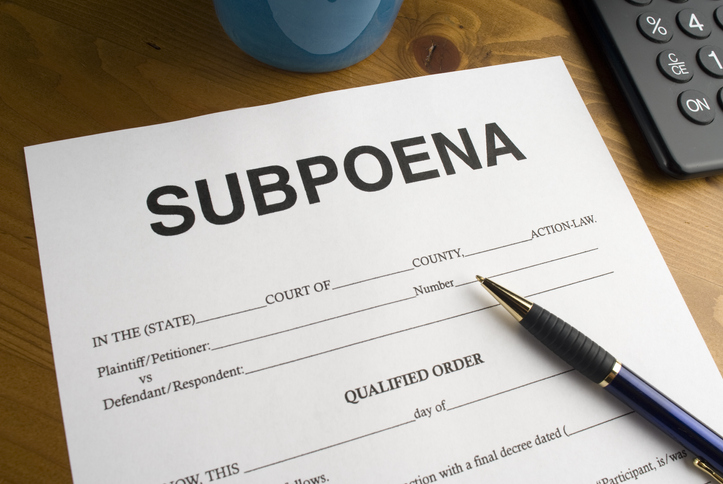 In Virginia, two frequently used subpoenas can be served to assist a party in a civil matter to further aid in discovery or at trial. Those two types of subpoenas are a subpoena duces tecum and a witness subpoena.

A subpoena duces tecum can be served upon both parties and non-parties to a civil matter pursuant to Virginia Code § 16.1-89 and Virginia Supreme Court Rule 4:9A. Duces tecum is Latin for “bring with you,” which is exactly what a subpoena duces tecum is requesting of a person or entity. This type of subpoena is an order that requests a person or entity to produce specific documents at a specified time and location, which may be relevant to your case.

Who can issue a subpoena duces tecum?

Can you fight a subpoena?

In addition to a subpoena duces tecum, a party can issue a subpoena for a witness to attend trial or deposition pursuant to Virginia Code § 8.01-407 and Virginia Supreme Court Rule 4:5. Similarly to a subpoena duces tecum, a witness subpoena can only be issued after a lawsuit has been filed. It can also be issued by an attorney licensed to practice law in Virginia, who is in good standing or by the clerk of the court upon written request of a party pursuant to Virginia Code § 8.01-407.

A witness subpoena must also be properly served upon the witness whose testimony is sought. Virginia Code § 8.01-407 further states: “When any subpoena is served less than five calendar days before appearance is required, the court may, after considering all of the circumstances, refuse to enforce the subpoena for lack of adequate notice.” Make sure you get those subpoenas served well before that five-day deadline to avoid this misstep.

Subpoenas are a useful tool available to parties in a civil lawsuit that can further assist during the discovery phase of a case and provide valuable information to prove your lawsuit’s facts.